Despite vast improvements in cycling infrastructure in many cities across the continent, the majority of North Americans still don’t bike to work. While the benefits of cycling to work are nearly innumerable, we managed to round them down to just ten so we wouldn’t run out of space on the Internet. From the Momentum Mag staff, here are our top 10 reasons to bike to work:

Source: The Top 10 Reasons Everyone Should Bike to Work | Momentum Mag

If there’s one person many are putting their faith into to help improve the sport of cycling, it’s Derek Bouchard-Hall, the new CEO of USA Cycling.

The Bryan/College Station Rotary is once again sponsoring a very well-organized, SAG supported ride complete with rest stops this coming Saturday, October 10! Many locals will be participating! See the calendar event for more details!

TAMU has applied to be designated a Bike Friendly University in an effort to jump start the next phase of culture change regarding bicycles as legitimate transportation in Aggieland.  Additionally, the TAMU Bicycle District Plan which will become an official appendix in the revised TAMU Master Plan is being delivered this month.

While I know we are not perfect, we have made dramatic improvement over the last 4-5 years.  Earning this designation will help me help us in the ongoing continuous improvement process.

Note this URL is customized for Texas A&M University!  The survey will be open through Friday, September 18, 2015.

Thank you for your consideration in doing the survey.  Bear in mind, I will not be getting the results of the survey to read your feedback.  If you desire for me to know your feedback, please email me directly.

Please forward or post this email in its entirety so we can get as many responses as possible.  I ask that the whole email go out to explain the context of the survey. (edit: period expired) is intended to be used as a template to fill in your using your own voice. Some considerations to ponder that may speak to you:

END_OF_DOCUMENT_TOKEN_TO_BE_REPLACED

In the early days of the motor vehicle, there used to be this quaint idea that the person operating the giant machine should look out for other people. Then came mass production and the Model T. Suddenly there were automobiles all over the place, and by the end of the 1920s, cars (or, more accurately, their drivers) had killed more than 200,000 people.

A new mobile food trend is spreading, and has even caught NPR’s attention: food bikes!

I had a chance to visit Handlebar Coffee in Seattle a few weeks ago. They served up some delicious Aeropress coffee, nice and warm on a cold winter morning.

Have you experienced any food bikes? 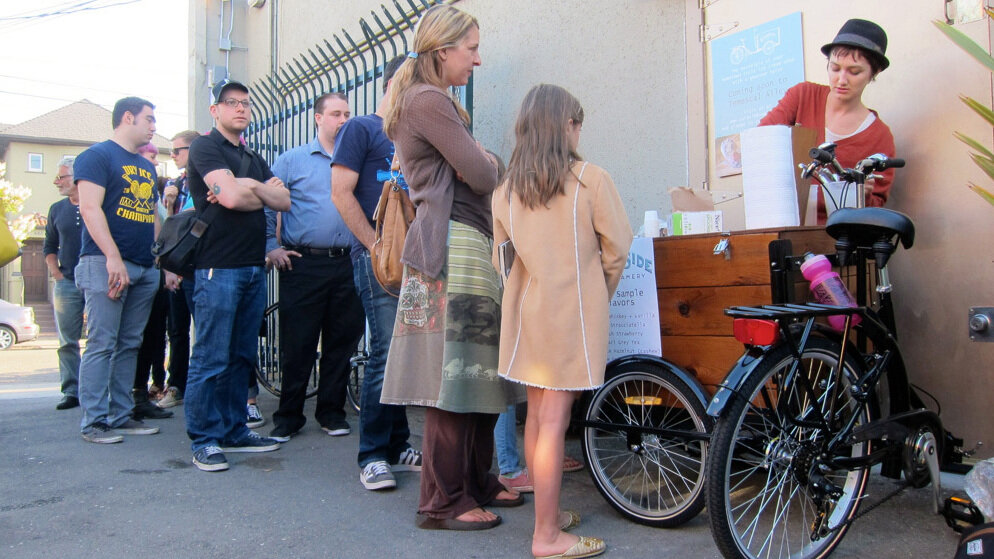 When the weather gets cold and wet, many people decide to hang up the bicycles for a while and turn to other activities instead. Oulu, Finland, however, is the winter cycling capital of the world, despite the fact that they have eight and a half months of winter every year!

Do you keep riding through all weather? What do you do to stay comfortable and safe when it’s cold, dark, and rainy?

The BVC bicyclists recently contacted two of the College Station 2014 City Council Candidates for Place 5 to gain perspective on how they plan to address bicycling and other transportation issues as City Councilmembers. Here, in order, is the message we sent, as well as the candidates’ replies, in the order received:

On behalf of the Brazos Valley Cyclists, a local association of bicycling enthusiasts (https://brazoscyclists.org), could I impose and ask for a few minutes of your time to answer a question we have?  I’ll send your responses to our listserv and post them on our blog.
The question is:  What do you see as the largest transportation challenges that you will work to address as a city council member, and how will you address those transportation challenges?
The questions we are not asking (but which offer a sense of cyclist sentiment) included
– would you fund bike lanes and bicycle-specific detection at intersections?
– would you support regulations that punish car drivers who hit cyclists rather than just chalking it up to “whoops, maybe the cyclist did something wrong”?
– would you support education programs to teach residents about rules of the road for cyclists and also how they apply to car drivers (I’m often amazed at how few car drivers recognize my hand signals on a bike)?
– would you support rolling stops when safe?
– when was the last time you rode a bike?
Thank you for thinking about our question and especially for being willing to dedicate the significant time and effort to run for city council and serve.  That willingness strengthens our democracy.

If I can provide more information, please let me know.

Thank you for your vigilance and dedication to ensuring that your government and the people that are elected to it, is responsive to the issues that you care about most.
Transportation challenges are complex to our growing community.  With the challenge of planning for future needs in a community that has now surpassed the 100,000 population mark, and in a greater county of nearly 250,000; College Station’s transportation solutions will have to be multifaceted.  Responsibly we must continue to develop main arteries, expand roadways and highway infrastructure that compliments are current strategy.  Acknowledging that we also have much more pedestrian traffic, we need to ensure pedestrian safety in areas of heavy pedestrian use.  While you and I both know that all communities can do better in planning bike lanes and being more pedestrian friendly, I believe that there are few communities that have embraced pedestrian friendly concepts as well as we have.  Recognizing the need, bike lanes have been placed on many major thoroughfares throughout College Station, particularly near the Texas A&M University Campus.  Also acknowledging the need to protect pedestrians, College Station worked with TXDOT to slow traffic down, close streets, add a developed median and retainer wall to better protect pedestrians on Northgate.  Many in our community also rely on the bus system, and I believe that as our community grows, we will have to work with our regional partners to ensure that a regional transit authority has fewer holes and offers a true alternative to driving to destinations.
With regard to questions or sentiments that cyclists are interested in, I can relate with many of these sentiments, however I am not an avid cyclist myself.  I don’t believe that drivers typically know what hand signals mean despite the fact it is part of the curriculum of drivers safety courses.  I can also understand the frustration of drivers not being educated on sharing the road with cyclists.  I have heard talk of legislation where individuals that are involved in a traffic issue with a cyclist would be required to take a transportation safety course with emphasis on cycling, and that would seem to make a lot of sense to me.
I hope that you have found this helpful.  If in the future there is an issue that comes before the Council in which there is a perspective that should be shared on cycling, I hope to hear that perspective, and I hope you will stay committed to advancing this cause.

The question is:  What do you see as the largest transportation challenges that you will work to address as a city council member, and how will you address those transportation challenges?
The biggest issue I see is how is the City of College Station going to prepare for the expected growth in population in terms of traffic.  This is a multi-agency project and I know that they are working on options.  When you say “transportation,” do you mean as public transportation or the traffic issues?  If it’s traffic issues, cyclists put themselves at risk every day trying to navigate our crowded neighborhood streets.
The questions we are not asking (but which offer a sense of cyclist sentiment) included
– would you fund bike lanes and bicycle-specific detection at intersections?
Absolutely.  It is the city’s responsibility to ensure its citizens are safe and there is a lack of bike paths all over this city, especially in our neighborhoods. I’m not sure what “bicycle-specific detection at intersections” refers to.
– would you support regulations that punish car drivers who hit cyclists rather than just chalking it up to “whoops, maybe the cyclist did something wrong”?
Once again, absolutely!  Drivers need to respect the cyclists as they have just as much right to use our streets as they do.
– would you support education programs to teach residents about rules of the road for cyclists and also how they apply to car drivers (I’m often amazed at how few car drivers recognize my hand signals on a bike)?
Yes, I would.  A friend of mine who is a cyclist has these same concerns.  Sadly, not all cyclists use hand signals and I’m always impressed to see those who do.
-would you support rolling stops when safe?
As I understand it, cyclists must follow the same laws drivers do.
– when was the last time you rode a bike?
Oh my, way too many years to remember but it’s been a very long time.